sit back, it's fright time!

Nemesis (codenamed Secret Weapon 3) opened on March 19, 1994 and was Europe's first and the world's second inverted roller coaster. During the 90s, a raging height battle was going on in the roller coaster industry, however as everybody knows, Alton Towers was restricted to tree height. This gave them the fantastic idea of digging down. A huge crater was dug that Nemesis is situated in. While the coaster is only 42.6 ft tall, the crater allows for a 104 ft drop. Nemesis runs 2 trains of 8 cars, which is a common cause of long wait times as Nemesis is considered to be the most popular coaster at Alton Towers. However, it is all worth it in the end as Nemesis is one of the top 10 roller coasters in the world.

The story of Nemesis begins before the coaster was even built. It is said that while digging the ravine that Nemesis would reside in, worker began finding strange pieces and symbols within the ground. These were found to be considered warnings from over 1000 BCE that signified that rituals used to take on the ground. People would gather over the spot and chant the incantation until Nemesis rose, and when it came, it would feed. With Nemesis awoken by the excavators, it had to be controlled. It took over 200 men and 250 tons of steel to hold down Nemesis, and that steel is the coaster that you ride today. 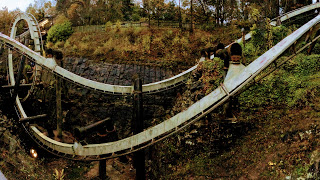 an example of Nemesis in a crater 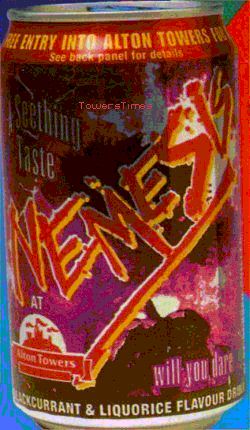