on august 25, 2019, i went to Luna Park with one of my closest friends! unfortunately there was no coasters aside from the very undear and painful Thunderbolt that could break my height limit. we got to the park around 4pm, plenty of time to get in on the rides. i bought the luna pass which gave me unlimited access to all the rides. in terms of coasters, we went on circus coaster first. i went on circus coaster last year (and circus coaster only, lol) and it was alright. zamperla did a great job on this one. we waited for tickler, which as usual was a mediocre wait because 1 car, but they were running a good 6 train ops. we went on a few rides between because those were the only ones on that side of the park. for my most exciting part, was riding Steeplechase. i didn't know it was launched until we were already on line. i took off my glasses because i didn't want them to fly off. i was so scared waiting for the launch. the countdown began and my heart was beating so fast! when the launch initially happened, i was scared out of my mind. the Gs were INSANE! after reaching the top, it was smooth sailing from there. it was so fun!!! right after, i rode again because i liked it that much. WIP...

on june 22, 2019 i went to my first park as a REAL coaster enthusiast! i really wanted to get up my max height (which was 55ft by Kingdom Coaster at Dutch Wonderland in Lancaster, PA) by at least riding Comet, which is 84ft tall with a 78ft drop! so we got to the park at around 5pm bc we had sunset tickets, and i was really trying to get 6 credits in by closing. we first went to the chocolate world to ride the chocolate tour (which changed a lot since the last time i was there 9 years ago from what i remember!) and took a ride on the carousel and tilt a whirl. i was originally going to ride Comet first, but i wanted to ride Trailblazer with my brother since it was an Arrow Dynamics coaster that i could ride with my brother! trailblazer only had a 30 minute wait which was great, and then i got on line for Comet while my bro went to ride trailblazer again (since they both had 30 min waits.) the wait felt really long for Comet but probably only because i was really anxious and was taking deep breaths lol. my highest was jumping from 55ft to 85ft, so of course I was going to be scared! i ended up sitting next to this dude and warned him about my screaming, which he said was ok, and then we started to go up the lift hill. at this point i wasn't even scared at all for some reason, but we went over the top and i clenched my eyes shut so tight and i didn't even scream. the feeling was insane! i did scream a few more times as we went around the coaster, but i was kind of sad i closed my eyes a lot, because i wanted to enjoy the sights lol. anyway, Comet had AMAZING airtime i didn't get to experience, because girls' shorts make your thighs stick to the seat. :( anyways, next up i headed to sooperdooperLooper, where i wasn't scared at all on the line. i took my glasses off since i was afraid i might lose them on the loop. i was only scared going up the lift hill, but the loop was GREAT! i LIKED the loop! the rest of the coaster was smooth sailing and i kept my eyes open! i'm happy i was able to ride a Schwarzkopf roller coaster at least once. i really wanted to get on Laff Trakk, so I skipped Wildcat and Wild Mouse in my list for now, but Laff Trakk had an 105 minute wait :O! me and my brother waited though, and it was so worth it. we started on the backwards side, but since it was a spinning coaster it didn't really matter much after the first lift hill. Laff Trakk was my brother's first drop coaster (since Trailblazer doesn't really have a drop) and he was scared at first but he liked the second half. i said that if he didn't scream, i'd give him all my dimes, and he didn't scream! so i gave him all my dimes. after Laff Track it was already 10:15pm, which meant 45 minutes until closing. so i didn't get to ride Wildcat or Wild Mouse after all, but if i ever get to return, i will definitely ride Wildcat at least (i'm pretty scared of Wild Mice :-() anyway, i rode Howler (Tornado flat ride) to finish off the day, ate some dippin dots and bought a shirt at Character Central before we left. i took some pretty pictures of Skyrush during the day that i'll post below, as well as a picture of the shirt I bought. anyway, i'm So Pleased with my first experience as a real coaster enthusiast. i recommend hersheypark for anyone starting out with bigger coasters and with inversions, because Comet and sooperdooperLooper are great starters, and i also recommend it for experience adrenaline freaks, because Skyrush, Storm Runner, and Fahrenheit all look really amazing and I've only heard great things about them! please visit hersheypark if you'll be anywhere near the Hershey, PA area! (it's also only like an hour away from Dorney, if you're staying awhile!!) 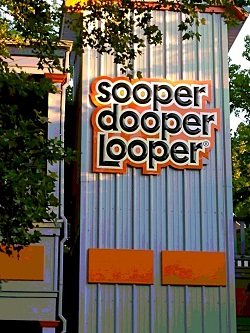 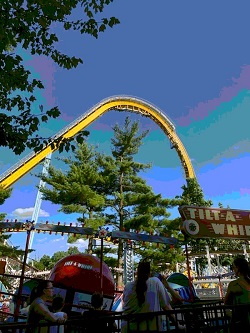 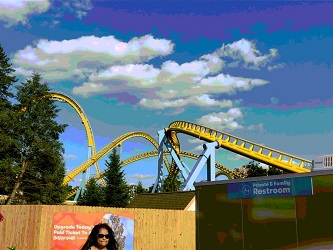 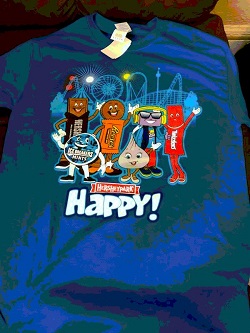